Did you know that many of Pala’s native plants were traditionally used for more than one purpose? For instance, manzanita provided food, medicine, construction materials, and was used in rituals. The berries were used to make a tea-like drink; mashed into a jelly; or  dried and ground into flour for mush.  The seeds were  ground into meal for mush or cakes or used in turtle shell rattles. A tea from the leaves was used to treat diarrhea and poison oak. The trunk and branches of the bush were used for firewood, construction, and making broom, tool and pipe handles.

Another plant that had many uses was white sage. Sage seeds could be used to make flour for mush, or blended with other seeds for flavor. Seeds were also used medicinally as an eye cleaner. The leaves were used for flavoring food and treating colds, or were dried and tied into bundles for smudging and purification. White sage is still used in this way today. Sage leaves were also mixed with water for use as shampoo or  dye. Dry leaves were placed in the underarms as a deodorant.

Some plants, such as deer grass, served one main purpose – in this case, basket weaving. The stalks were used as foundation, or warp, material in coiled baskets. Although deer grass was only used for making coiled baskets, baskets were used for all sorts of things, such as storage, cooking, carrying, and even hats! 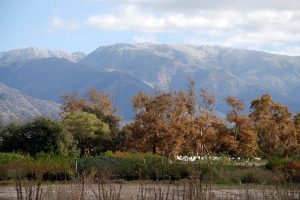