With the start of spring and warmer temperatures there will be a noticeable increase in insects and the diseases that they carry. One that is of serious concern is the Gold Spotted Oak Borer (GSOB), which is a flathead borer that causes mortality to oak trees. Experts believe it was introduced into the Descano area of San Diego County by the transport of infested firewood from Southwestern Arizona in 2004. The GSOB mortality of oak trees has since spread to other portions of San Diego County as close as Julian and isolated areas of Idyllwild in Riverside County.

The Gold Spotted Oak Borer (GSOB) leaves visible evidence on three species of oak trees common in San Diego County. When their larvae create feeding galleries underneath the surface of the bark, GSOB attacks may be recognized by the following evidence:

Evidence of injury can also include chipped outer bark from woodpeckers feeding on the larvae and small D-Shaped exit holes where the gold spotted beetles pupate and emerge from the tree. Impact varies between three oak species and can consist of gray or brown coloring in the crown of the tree and thinning of the foliage.

Currently the Pesticide Program is using these monitoring tools to detect GSOB:

These are tips for how you can help prevent GSOB from being introduced into the community:

If  you have any questions or want more information contact Pala Environmental Department Pesticide Technician Jesse Castro at (760) 891-3549. 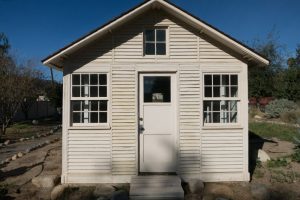